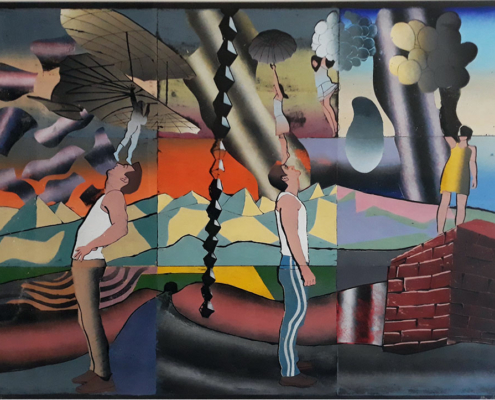 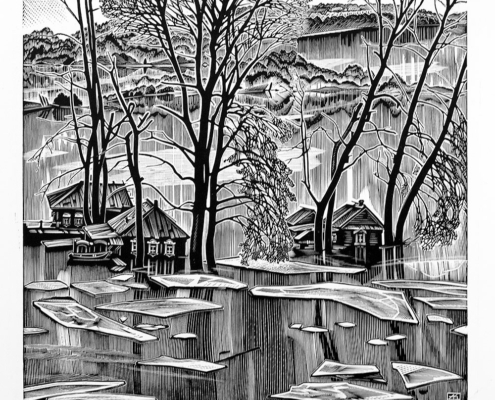 Outlines of an Artistic Genre

Printmaking. Outlines of an Artistic Genre presents numerous print works on paper from 100 years ago, the earliest from the 1920s, the most recent from 2021. The exhibition follows on from last year’s print exhibition: While the first print exhibition at Wolf & Galentz was dedicated to a single genre, namely wood engraving, which has become rare, the upcoming show explores the limits and possibilities of printmaking in general. Works of the most diverse techniques will be shown, including some exciting experimental ones; the formats range from miniatures to unusually large-format works; the artists come from East and West Germany, Russia, France, Belgium and Austria. The focus is on the presentation of artists from Russia, the Caucasus region and Germany.

The compilation is the result of decades of collecting and of journeys to the Urals undertaken especially for the exhibition.

The exhibition shows historical and contemporary artistic graphics, including works by Mikhail Verkholantsev, early books with original graphics by Vasily Masyutin and Pavel Shillingovsky, as well as a famous Picasso portrait by Georgi Echeistov from 1934. Arkady Kolkhanov’s family entrusted us with several very rare wood engravings by the master. Konrad Felixmüller’s long-time printer, Hans-Jürgen Wilke, lent us works from his collection. We were allowed to select some sheets from Jürgen Wittdorf’s estate for the exhibition. At several auctions and art dealers we looked for lithographies in mezzotint by Rolf Münzner and Andreas Dress from the GDR especially for the exhibition. Also, we collected linoleum prints by female artists from the Soviet Union of the 1960s and 1970s at auctions. Some colour-intensive prints that would have deserved their own exhibition will only be presented in a folder on request due to lack of space. Miniatures – bookplates and others – by masters of the genre such as Gerard Gaudaen from Belgium and Anatoli Kalashnikov from the USSR will also be on display. Another highlight will be the unusually large-format prints by Christian Stock, Philipp Mager and Anton Laiko.

Linocuts and etchings by Klaus Fußmann and annual greetings by his student Hans-Joachim Billib will be shown. The silkscreen prints from the 1970s by Jürgen Peters, produced in workshops in the USA, are captivating in their clarity and outstanding quality. A series of etchings by Aude de Kerros, which combine intaglio and letterpress processes on one sheet, manifest the mastery of the artist from Paris.

In addition to classical printing techniques, experimental approaches are also shown, such as the prints by Svetlana Vedernikova from St. Petersburg, who developed her own printing technique using oil-based ink with an etching press after the end of the Soviet Union, when the artist no longer had a lithography workshop at her disposal. Furthermore, offset prints by Ruth Wolf-Rehfeldt, experimental litho, etching and copperplate monotypes and other techniques up to holograms by Jürgen Eichler can be seen. A catalogue to the exhibition will be published next year.

The exhibition will be accompanied by the edition Gesundheitsrisiko Verkauf by artist Henrik Jacob, with whom Wolf & Galentz have been working more closely since 2020.

The exhibition will be flanked by a supporting programme. On Sundays at 4 p.m., various topics related to printmaking will be explored in greater depth.

The exact dates and more supporting programme will be announced soon on the website.

On the occasion of the exhibition, we will launch an edition of the work Gesundheitsrisiko Verkauf (Sale as Health Hazard) by the artist Henrik Jacob, with whom Wolf & Galentz have been working more closely since 2020.