We cordially invite you to our event on 15 October at 7 pm as part of the exhibition “The Rehfeldts – an artist family from Pankow”.

Lutz Wohlrab will talk about “The Rehfeldts and Mail Art” and Julia Heunemann about the Mail Art Archive of Ruth Wolf-Rehfeldt and Robert Rehfeldt (in German language).

With a background in cultural and media studies, Julia Heunemann is interested in the techniques and practices of transmitting, collecting and exhibiting. She works at the Mail Art Archive of Ruth Wolf-Rehfeldt and Robert Rehfeldt, writes a PhD about the historical investigation of the deep-sea and curated exhibitions e.g. at museum FLUXUS+ Potsdam and galerie weisser elefant Berlin.

Dr. Lutz Wohlrab (b. 1959) has participated in many international Mail Art exhibitions since 1985. In 1994 he co-edited the seminal work on the mail art scene in the GDR (Mail Art-Szene DDR). In 2007 a mail artist encyclopedia followed on the internet: www.mailartists.wordpress.com. He works as a psychoanalyst in Berlin. His publications include Stücke von Ruth Wolf-Rehfeldt and Kunst im Kontakt on Robert Rehfeldt. 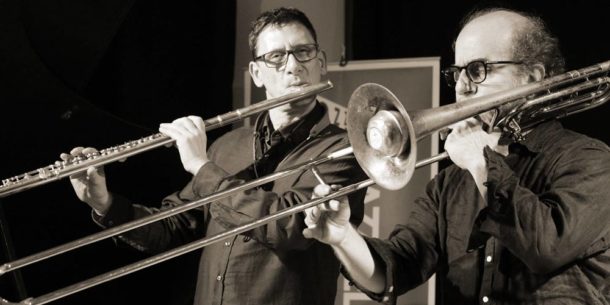 The trombonist is well-known as a musician with a unique style of interpretation, as a composer between jazz and contemporary classical music and also as a member of the Italian Allstar ensemble Instabile Orchestra. Collaborations with, among others, Mario Schiano, Frank Gratkowski, Giancarlo Schiaffini, Joelle Leandre, Paul Lovens, and Carlos Zingaro.

He has played in Europe, Japan, the US, and Canada. Tramontana lives in Munich.

Especially as when playing solo or in small ensembles the unusual clarity of his play is audible. Gratkowski is also known as being a talented researcher of sounds, who continuously works on the expansion of his sound repertory and on the exploration of tonal possibilities of his instruments. he performs his micro-tonally oriented compositions with the Multiple Joy[ce] Orchestra.

He has been teaching saxophone and ensembles at the Cologne, Berlin and Arnhem Conservatory of Music and is giving workshops all around the world.

Born in Finland in 1952, he played piano and guitar in his youth and later found his voice in the music on soprano and sopranino saxophones. He studied music and fine arts in San Francisco in the 1970s, which led to participation in workshops by John Cage, Vinko Globokar, George Russell and Bill Dixon, and to study saxophone under Leo Wright and Steve Lacy. After returning to Europe in 1978 he played with Derek Bailey, Paul Lovens, Paul Rutherford, Reggie Workman (among others) and eventually started an extensive working relationship with Cecil Taylor on many projects, including five small group recording releases. He has also composed music for film and is still active today with his photography.

On Tuesday 26  November 2019 there will be a Real-Time-Composition Concert at Wolf & Galentz.